Simply do what your consumers want: deliver relevant and less annoying ads

How often have you gone to a website and seen an ad block your view of the page or had to wait patiently for the page to load while hundreds of blinking, jumping, flying and  otherwise annoying ads jumped across the screen trying to get your attention?  Post this last holiday season, I (like many of you) am still being haunted by re-targeted ads which are built with awful technology that while smart enough to figure out what I browsed cannot seem to figure out that I have already bought the product and insists on offering it to me over and over again in terrible looking template ads.

Even if you are in the ad business (like I am), you would have to admit there has to be a better way for publishers to make money and for brands to engage with consumers without annoying them.

It has been interesting to see the industry's reaction.  It has ranged from denial --  "only a small number of people block ads", "we only pay for ads that actually serve so we don't care" to other more drastic measures.  One drastic measure was publishers saying they would block their sites to anyone with an ad-blocker installed.  Still others are thinking about legal action against ad-blocking software. The IAB's LEAN ads initiative is perhaps the best attempt at getting to the root of the issue i.e. awful and annoying ads.

This reminds me of the ongoing controversy around Uber.  Everyone ranging from city councils to taxi associations and cab drivers are tossing bricks at Uber. Yesterday as I landed at San Francisco airport and was waiting for my car, I saw a cab driver cut off an Uber driver, wave his fist angrily and yell out  "*^@& Uber".

As a consumer - I like Uber. It is convenient, inexpensive and solves my problem of getting from point A to B.   I travel to NY frequently and as much as I sympathize with Taxi drivers whose livelihoods are threatened by the swarms of Uber drivers, I have to say the number of times a taxi driver has simply refused to take me because I wasn't heading to where he wanted to go to was very frustrating.  Consumers don't stop using a new product or service just because the incumbents may get hurt.  All you have to do is remember the initial uproar over streaming services, youtube, programmatic media, fracking and just about every big disruptive technology that hit the market.

I would strongly urge Publishers, brands and others who are impacted by Ad-blocking to simply do what your consumers want:  deliver relevant and less annoying ads.

How to deliver less annoying ads is probably best described by Scott Cunningham of the IAB tech Lab: http://www.iab.com/news/lean/

The idea here is to pay attention to ads to make them a much better user experience.  This means ads that load quickly without slowing down the page. Ads that are served respectful of the user's desire to consume content on the page.  Ads that respect the user's privacy and security.  It sounds like a lot, but technology to do this is available today.

Ads themselves are clearly not the problem.  Advertising has been around for centuries on TV, print etc.  According to the Massachusetts Historical Society, this was the first print ad that appeared in 1704 - over 300 years ago.  I am sure we can all agree it looks awful.  Newspaper ads however didn't disappear, they just became much better, with today's ads in full color, usually in designated sections (like classifieds) or at least placed where they are obvious and not mixed in with content to trick customers. 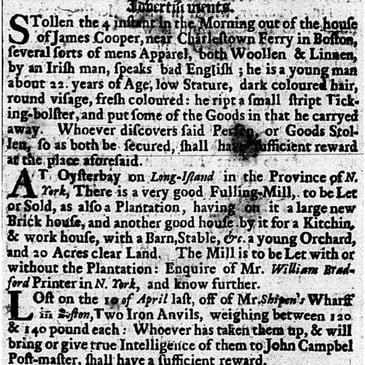 So the issue again is not advertisements themselves but awful advertisements. So lets try and make them better, more creative, more visually appealing, loading quickly, not blocking content, not hiding within content and lastly relevant to the consumer viewing the ad.

Making ads "lean" is possible if ad serving platforms used the same technologies that websites have used for years.  Most modern websites use technologies like a content management system, CDN technology and progressive download technology that loads only content that is in view etc.  Most ads on the other hand are still being developed the way websites were developed in the early 90's - as large blobby files where lots of code and assets are stuffed and when served compete with the page's content and slow down the page.  Newer cloud based "dynamic" ad technologies are solving this problem by serving up only the minimal set of assets and code needed for the ad to render.

The critical "ask" by consumers is that ads be relevant is not to be ignored. For decades consumers have been pelted with largely irrelevant ads on TV and print.  If you wondering why they were tolerant of those ads but are fighting back against similarly irrelevant digital ads, the reason is simply that they are smart enough to know that digital platforms can and do offer the ability to make ads more relevant and personalized.  Many consumers actually like or at least don't mind ads - they serve the purpose of letting them know about products they want to purchase.  The problem is that for over a decade now we have been bombarding users with irrelevant ads.  Why do I need to see an ad for a women's product that I definitely don't use.  Why do I need to see an ad for a product I just purchased.  Show me ads for things I am likely to want and I will reward you as a brand by buying from you.

Amazon and Netflix have used personalization technology very effectively to offer up products and movies tailored to your needs.  Why is the advertising industry still serving up irrelevant ads?  75% of Netflix videos watched are as a result of personalized recommendations by Netflix.  No one is complaining about that.

So as an industry its time we stopped acting like angry cab drivers waving our fists at ad-blockers, but lets offer a better ads and a better user experience to our consumers and we will not have to disable ad-blockers, consumers will do it themselves.